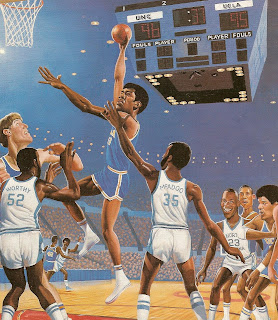 Martin Luther King Day is tomorrow. For me, MLK's birthday is a time to reflect on the wonder of a movement unlike any other movement in our lifetime. Sports is a microcosm of society. There were many sports stories from the 1960s which are woven into the fabric of the civil rights movement and struggle.

One that comes to mind is the story of 7' 2" New York City high school basketball star Lew Alcindor (he would later, of course, convert to Islam and become Kareem Abdul-Jabbar). Upon his graduation from high school in the mid-60s, it was obvious that Lew was destined to became an NBA legend. He had to select the appropriate college to attend to best prepare him for the NBA. No one moved from high school to the NBA in those days.

Young Lew was advised to visit with NBA legend Wilt Chamberlain for advice. Lew was the obvious heir apparent to Wilt's NBA legacy. Wilt recommended that Lew visit with coach Frank McGuire at the University of South Carolina, where McGuire coached at the time. Wilt had played for Coach McGuire at the Philadelphia 76ers in the NBA. He knew that the very best preparation for the NBA which Lew could get would be to play under Coach McGuire.

Lew promptly visited with McGuire in Columbia. Coach McGuire was happy to meet with him and provide his counsel. But sadly, Coach McGuire had to tell Lew that the University of South Carolina was not ready for a black athlete. "The time will come", McGuire told him, "but the time is not now".

As we know, Lew attended UCLA. UCLA won 4 NCAA National Titles during his 4 years there. Some suggest that South Carolina could have become the UCLA of the East had attitudes been different. Others speculate what Alcindor's attendance there might have done for the University, for the state of South Carolina, for the relationship between the races in the South during those years of the mid-60s.

Then, on September 12, 1970, there is the story of the University of Southern California becaming the first fully integrated team to play in the State of Alabama. The game, purposely scheduled by Coach Bryant, resulted in a dominating 42-21 win for USC. All six USC touchdowns were scored by African American players. As a result, Bryant was able to convince the university to allow African Americans to play, hastening the racial integration of football at Alabama and in the South.

The stories abound. I suppose it can be said that some of the early change, like "Bear" wanting to win football games, came out of necessity and self-interest. But the civil rights movement changed hearts. The civil right movement changed America. And the face of sports was no small part of the change.
Posted by bbogodfrey17@gmail.com at 9:00 AM