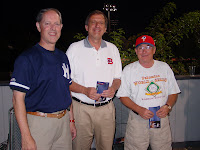 It was quite a night. It wasn't about baseball as much as about how lives had evolved, how they had been impacted by baseball.

We were in The Grandstand at Greensboro War Memorial Stadium, the night before the final game. The first professional game had been played there 74 years earlier (over the objection of some who preferred youth and amateur baseball to the proposed professional game for Greensboro). Memorial Stadium was closing to make way for a new downtown stadium.

Miles Wolff was there. Miles is considered the father of the modern minor league baseball rebirth in the late 1970s. He brought the Durham Bulls back to Durham in 1979 after being told by Greensboro city fathers that they could not give him enough dates at Memorial Stadium for an entry into the Carolina League where he had been awarded a franchise. Miles sold the Bulls to Capital Broadcasting in 1993 for a return on investment that would make Warren Buffett blush. Miles is now equity interest commissioner of three independent leagues, past owner of Baseball America, and owns teams in Quebec City and in Burlingon NC. Miles and I began attending games at the Stadium over 50 years ago. We sat together behind the third base dugout, what seemed like every summer night from 1957 to 1966.

Wilt Browning was there. Wilt, the legendary sports writer, traveled with the Atlanta Braves for the Atlanta Journal Constitution during the first 6 years of the Braves existence. Johnny Smith , founder of Palomino Baseball in Greensboro, member of Pony League Hall of Fame, and G-Yanks batboy from '58 to '66 was there. Ogi Overman, freelance journalist, local sports historian, and long-time offical score keeper for the Bats was there.

What a group. They told stories about where life had taken them, about baseball people they had known, about their shared passion for the game that had so impacted their lives. They knew where many of the old players were today, where some to the old managers were. Wayne Tewillinger, the 1961 G-Yanks manager, at age 80, manages in the Central League where Miles is commissioner. Johnny had called Ronnie Retton and asked him to come for the final weekend at Memorial. Retton, Mary's Lou's Dad and point guard on West Virginia University's basketball team along side Jerry West, was '62 G-Yanks second baseman.

Miles had been on the phone with Jim Bouton earlier in the week. Bouton, a G-Yanks 20-game winner in '60, an old stadium preservationist and successful author, is trying to put a minor leagure team in his hometown of Pittsfield, Mass. Someone said grand old trainer and A&T football coach Hornby Howell was growing old gracefully in Raleigh. Someone said Ralph Scorca, '60 pitcher for the G-Yanks, was killed in the World Trade Center on 9/11.

Ogi recounted the story of the old stadium in Danville Va. being dismantled, tagged piece by piece, and literally moved to his hometown of Burlington NC, and reassembled to form Fairchild Park. Johnny recalled a funny story of 1958 catcher John Malongoni carrying his little dog around with him in his pocket. Miles and Wilt recalled stories of their close friend Tommy Aaron (Hank's brother) who was Miles' field manager at Richmond during Miles' first job in minor league baseball as the play-by-play radio voice of the AAA Richmond Braves.

I told of a very small crowd game of a hot night in the early '80s. I was walking up the steps to my seat behind third base, and there sat Roger Maris, quiet and alone. I didn't want to draw attention to him so I just nodded to him as I passed. He was there to watch his son play for the visiting team. Later he began to be surrounded, so Ogi, official score keeper that night, invited him to finish watching the game from the press box.

I relayed a story told by Bill Wardell, radio voice of the Hornet/Bats in the '80s and early '90s. Bill had attended the SAL All-Star Banquet in 1991 and was seated at the table with guest speaker Mel Allen, legendary voice of the NY Yankees from 1939 to 1967. Allen told those at his table that he had actually been born Melvin Israel in Greensboro on Summit Ave. in 1913.

Wilt Browning told the most poignant story of the evening. Wilt was in the second year of traveling with the Braves. It was April 1968. Martin Luther King had just been shot in Memphis. Wilt felt he needed to find Henry Aaron. He did. Hank was on the team bus alone. Wilt spent two hours alone with Hank as they reflected on Hank's slain friend, and on important things that dwarfed bats and ball.

Oh, what a night at the ballpark. My son, to my pleasant surprise, walked up to join us at the beginning of the evening. He had come down from Washington just for that special night. He went to many games with me when he was growing up. He knows he heard some great stories that night, but not baseball stories. He had heard stories about the wonder and beauty of life as expressed through that which bound all the participants together. I wish for him in life the same joy, the same passion that I sensed in all who gathered in The Grandstand, August 28, 2004, at War Memorial Stadium, all whom I am so pleased to call friend.