Good Night On The East Side of Town 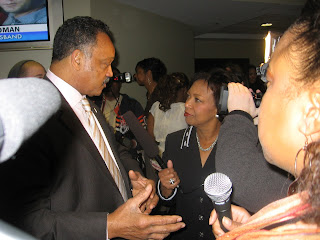 Jesse Jackson said, "something magical happened in Greensboro in 1960. A fire was struck, the wind blew, and it captured a nation". I was at a forum on The State of the Civil Rights Movement on a beautiful A&T campus. On the panel were Jackson, Ben Chavis, one of the Wilmington 10, Steve Smith of FoxSports, A&T Chancellor Harold Martin, Bennett College President Julianne Malveaux, Ed Gordon, Emmy-winning BET journalist, and others. Joseph McNeil , one of the "Greensboro Four" was there. David Richmond Jr. was there (his Dad, now deceased, was one of the "Greensboro Four").
The first person I saw and talked with was Jack Betts, Page High graduate and prominent political writer in North Carolina for 30 years, with both the News and Observer in Raleigh and the Charlotte Observer. We reminisced about our friend Miles Wolff, so important in the documentation of the sit-in events, the great liberal Chubby King, and exchanged observations about what was about to occur and who was in the room.
Steve Smith gave a direct, "Bill Cosby, tough-love" perspective about today's generation. Jackson scolded the two Chancellors for low voter turnout in the recent mayor's election. Ben Chavis said we need a revival each generation. He talked of a cultural gap in the black community (there were many upper class blacks on panel and in the crowd, educated at Spelman, Howard, and Ivy League schools). Jackson, just back from Haiti said, "the earth is shaking under your feet". He said black athletes compete well because the playing field is level (alluding to the difficulty he sees blacks have in penetrating the mainstream economic life of America, which he sees as an "uneven field").
I certainly didn't fall "hook-line and sinker" for all I heard. But I needed to hear that perspective. We must listen to one another. As Dr. Covey says, "we must seek first to understand, then to be understood".
It was a great night. There were very few people from the west side of town in attendance. Trust me when I say......... that was the only discouraging thing about the evening.
Posted by bbogodfrey17@gmail.com at 6:24 AM