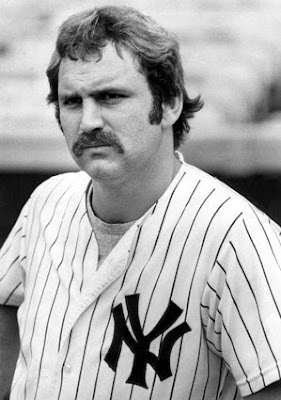 Good shot of Yankee great Thurman Munson, the first Yankee Captain since Lou Gehrig. He was a tough and gritty player. He was also a great player. He was a great hitter and had the quickest arm to second anyone had ever seen. Tragically, he died in a small plane crash at the age of 32. Lou Gehrig died at age 37.

Munson and I played on the same team the summer of 1968 at Chatham of the Cape Cod League. He signed that summer with the Yankees. He also brought Steve Stone to Chatham that summer. Stone later won the Cy Young with the Orioles and was the voice of the Cubs on WGN with Harry Caray for years. Munson and Stone were batterymates at Kent State University.

What a summer to spend in New England (I returned in '69 as well). Most people will recall or have read about the Spring/Summer of 1968. There was major cultural and political upheaval occurring in America. Just a sampling; student protesters of the escalating Vietnam War took over the administration building at Columbia University for an extended time, the musical "Hair" opened on Broadway, the Beatles announced the creation of Apple Records at a news conference in NYC, major riots broke out at the Democratic National Convention in Chicago, Bobby Kennedy was assassinated, Martin Luther King was assassinated......the cover of TIME Magazine asked if God was dead too. And Mickey Mantle was playing his last season.

Quite a summer.......but a good summer for Munson, who became a New York Yankee, and for me , who did some growing up.