A Good Day in North Carolina 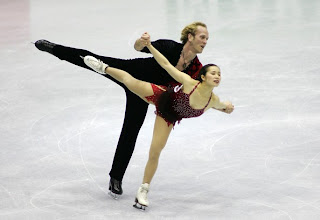 I am struck by the fact that the finals of the U. S. National Figure Skating Championships are being held in Greensboro today and are being broadcast around the world on NBC television. The event is showcasing wonderfully the historic Greensboro Coliseum. It is bringing $10. million into the community, not to speak of the free worldwide advertising on NBC for the city. At the same time today, the National Hockey League is holding it's 2011 All-Star Game in Raleigh, bringing the best hockey players from around the world to a worldwide television audience from Raleigh.
We would not have envisioned this 30 years ago. North Carolina has developed into a progressive, mainstream American state. We are no longer a sleepy, rural southern state whose economy is dependent upon textiles, tobacco, and farming. North Carolina is a vibrant state driven by a large national banking center, great universities, world class medical centers, high tech research and development centers, tourism, and entertainment.
This has been brought about by a number of significant occurrences. The Civil Rights Act of 1964 allowed the South to move into the mainstream of national economic and social/cultural activity. Progressive leadership in North Carolina, like Terry Sanford and Jim Hunt, acted as visionary facilitators in moving North Carolina in new directions. They foresaw the need for a strong community college system, for better public schools, for a research triangle park, for an effective partnership between public and private sector leaders. They recruited new progressive business leaders to help shape the state's future, leaders like Hugh McColl at NationsBank, James Goodnight at SAS Institute, Bob Ingram at Glaxo, John Medlin at Wachovia, and Jim Goodman at Capital Broadcasting to help move the state forward. Together, they charted a course for the state that resulted in a new, vibrant, 21st century North Carolina.
I never ceased to be amazed at the naysayers who continue to reject the concept of a strong public/private sector partnership. Thank goodness these people generally just stay home and complain. Specifically, on this day, I think of the Greensboro Coliseum complainers and haters. But with ice skaters from around the world in town this week, thankfully eclipsing that thought is the thought of the wisdom, vision, and hard work of those who had the foresight 60 years ago to build a great building with the help of the public.
Today's a good day in North Carolina. We owe a debt of gratitude to wise leaders who came before us.
Posted by bbogodfrey17@gmail.com at 10:08 AM