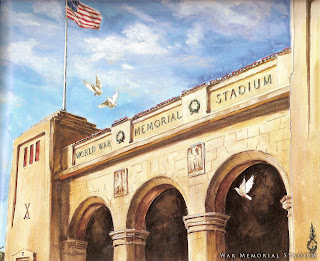 The summers of 1958 to 1963 provide my best War Memorial Stadium memories. I hardly missed a game. Men from across America came to my neighborhood to play baseball and try to make their way. Some were great players and some were colorful characters. All had the same passion I had for a great game. For a kid from the Aycock neighborhood, they brought the world closer, made it smaller, made me more a part of it.

In '58, catcher John Malongone was most memorable. He was big, emotional, and feisty. The more upset he got the farther he hit it. One Sunday afternoon he was decked by a pitch, had to be restrained from going to the mound, and hit the next pitch 425 feet over the center field wall. The Yankees were counting on him to follow Bill Dickey and Yogi Berra as the next great Yankee catcher. It was not to be, due to emotional problems as reported in Sports Illustrated some years back.

In 1960, the G-Yanks ruled the league and were Carolina League champions. Phil Linz led the league in hitting and third baseman George Banks and first baseman Jimmy Johnston hit 26 HRs each. Pitchers Jim Bouton, Jack Cullen, and Larry Del Margo combined for 41 wins. Attendance was over 97,000 and it was a joy to be at the ballpark.

Gates Brown, future Detroit Tiger, led the league in hitting in 1961 at Durham. The G-Yanks were led that year by Ike Futch (.305) at second base, big Chuck Riddell (28 HRs) at first base, and shortstop Ronnie Retton, who stole 35 bases, showing some of the agility inherited by his daughter Mary Lou (later an Olympic gold medalist).

The 1962 season was capped off by a late October visit by Roger Maris, Harmon Killebrew, and Jim Gentile for home run derby. They were barnstorming minor league parks after the major league season to make a few extra bucks. The night was misty, cool, and dreary. Something wasn't right about the night for me. Maris had broken Ruth's HR record for the year before. Some old leather lung rode Maris from the stands all evening. I worked as a concession boy in the stands due to high ticket prices.

Times were changing and uneasy. October 1962 brought the Cuban missile crisis. There was civil rights unrest in downtown as Jesse Jackson led the student body and the football team at A&T. I was turning 14. My best friend at the ballpark during those years, Miles Wolff, was finishing high school. (He would go on the own the Durham Bulls, publish Baseball America, and create the Northern League).

As I was beginning to sense the challenges and difficulties that come with time and passages, the one great constant for me was watching men from around America express the drama and beauty of life as the chased their dream at the ballpark right in my neighborhood.
Posted by bbogodfrey17@gmail.com at 6:45 AM