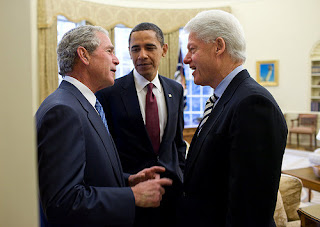 I am not betting against any of this happening. The Clintons (and Barack Obama) are exceedingly popular and capable, and I do not see that changing. Like the Adams of Massachusetts, Kennedys of Massachusetts, Longs of Louisiana, Roosevelts of New York, Lees of Virginia, Tafts of Ohio, and Daleys of Illinois, the Clintons and Bushes are American political dynasties.