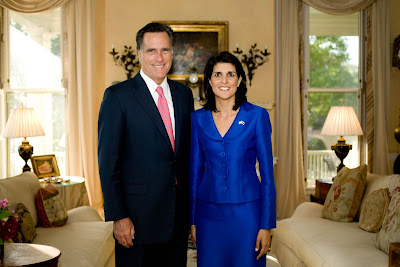 What an excellent image of Romney and Haley. I doubt it will happen, but this would be a formidable ticket for the GOP in 2012 or 2016. Romney is likely too progressive (although he is solidly conservative) for today's GOP and he will likely not make it through the GOP primaries. Other than his great poise and intellect, one of his strengths is that he is not overexposed. Amazingly, his progressive views on health care reform will be his major downfall with the GOP. It is early for consideration of Nikki, but if she is successful in South Carolina, and there is little reason to believe she will not be, she is a very attractive package for the GOP.

Below are some great photos from Nikki's inauguration on January 12, 2011.