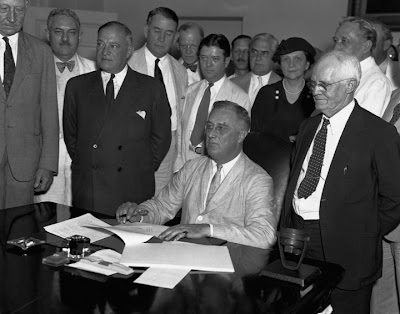 Franklin D. Roosevelt signs the Social Security Act in 1935, at the height of the Great Depression. Behind him is Francis Perkins of Maine, his Labor Secretary, the first woman cabinet member. Social Security was probably the greatest piece of progressive social legislation ever enacted. Social Security in 1935, Medicare and Medicaid in 1965, and Health Care Reform in 2010. America moves forward, albeit with slow and deliberate speed.

(Photo from album of Robert G. Swan).
Posted by bbogodfrey17@gmail.com at 7:14 AM