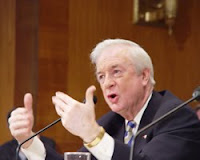 Reading about Jim Hunt fascinates me. I am pleased to have campaigned for him, voted for him, and met him on a number of occasions. He was such a politically brilliant, courageous, and great Governor of North Carolina. He served two terms as governor, two different times. He was either Governor or Lt. Governor for 20 years in the last half of the twentieth century.
He knew the people of the state so well. Education was his passion. An interesting, dirty little secret, one that Hunt was out to change, was that some of the state's old-line business leaders thought too much education might not be good for the state. Those mill owners, bankers, and big lawyers put a premium on the universities, which educated their sons, and sometime daughters in those days. But public schools had never been high on the priority list of many of them. It didn't take alot of education to run machines in a textile, cigarette, or furniture factory. The owners wanted people who would work hard for low wages and who wouldn't organize unions and stir up trouble.
Tellingly, North Carolina's average manufacturing wage, like it's SAT scores, ranked near the bottom in America. Hunt knew he had to recruit and motivate a new generation of business leader who would support and financially contribute to education in North Carolina. He did just that, people like Jim Goodman Capitol Broadcasting, Jim Goodnight at SAS Institute, Hugh McColl at Bank of America, John Medlin at Wachovia, and Bob Ingram at Glaxo.
Hunt sometimes took more conservative positions such as on busing. Hunt denounced busing. He even made a point of meeting George Wallace at the airport when the old segregationist was campaigning in North Carolina. Some of Hunt's liberal friends were dismayed. But Hunt was smart enough to foresee that the Democratic Party couldn't' survive without conservative whites. He had to walk a tightrope on race, just like Terry Sanford. He had to bring the people along with him slowly. He and Sanford were both political geniuses and great progressive Southern leaders.
Regarding his educating initiatives, Hunt was asked to head the Carnegie Foundation Commission on Education in the '70s. He chaired the commission which credited the National Board of Professional Teaching Standards. That was his idea and it served as accreditation for superior teachers. His education ideas were state of the art at the time: higher teacher pay, smaller class sizes, a Primary Reading Program (a teacher in every grade 1-3 classroom in North Carolina), and Smart Start for pre-schoolers. He was the first Governor in America to push for standardized testing and competency testing.
Every state needs a Jim Hunt. We were blessed.
(Source: "Jim Hunt - A Biography", by Gary Pearce)