The Most Significant, and One of the Longest, Home Runs Ever Hit 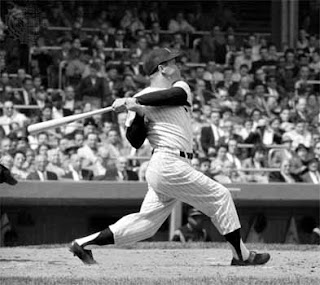 I am so enjoying "The Last Boy - Mickey Mantle and the End of America's Childhood." Among many great parts, I have just read a beautifully descriptive account of what's called the most significant, and one of the longest, home runs ever hit.
The account, from the time Mantle stepped in the batters box against Chuck Stobbs, a lefty 7-year veteran out of Granby High School in Norfolk Va., until the ball was retrieved, took nearly four pages. Beautifully written.
It was a cold April 17, 1953, Griffith Stadium, opening day in Washington, DC . An embarrassing crowd of 4,206 was in attendance on opening day. Some accounts:
"They throw him a changeup, I think. He moved forward but kept his bat back and took a short step and held back because it was a changeup. Then it released: his body, arms, bat came around, everything synchronized. Everything went in a smooth swing. Everybody in the dugout got up and moved forward onto the steps. We just kept walking in unison watching the flight of the ball," said Bill Renna, a spare Yankee outfielder, as he watched attentively.
"It went up and got caught in the jet stream. It took on a life of it's own," said Clark Griffith the stadium namesake. Bullpen catcher Ralph Houk said, "You're looking for it to come down, to go into the crowd. The next thing you know, it is over the crowd and out of the stadium. There's a silence. Everyone is looking that way. Even all the infielders on the opposing team and the left fielder. He's looking for it and he can't believe it went out of the stadium."
Country singer Roy Clark, who was seated behind third base said, "It echoed in the ballpark. Even before it was halfway to its destination, you knew, that it was gone. It looked like it was in the air for five minutes." "The ball was so high that Mantle rounded second base before the ball came down," said Wayne Terwilliger, Senator's second baseman."
They said the Hall of Fame called to request the bat and the ball. The ball was stolen temporarily, but later returned so it could go to Cooperstown. Stobbs was demoted to the bullpen and would be remembered for that one pitch. It was all anyone ever talked to Stobbs about. Time magazine coined the term "Tape Measure Home Run!" as a result. The ball went 585 feet, to the backyard of 434 Oakdale Place, a modest two story row house, off Fifth Street on the southside of a one-block street that dead-ended at Fifth Street, back of the left field wall.
They said Mantle rounded the bases with his customary modesty, head down as he touched each base. It must have been a sight.
Posted by bbogodfrey17@gmail.com at 2:26 PM