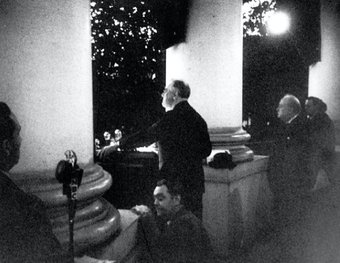 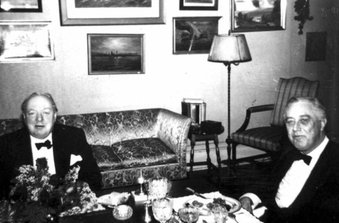 This grand and moving piece on Churchill's lengthy stay at the White House in December 1941 over Christmas, just weeks after Pearl Harbor, is a great historic read.


I highlight: "On Christmas Day, Churchill, the Roosevelt's and the rest of the White House party sat down to oysters, clear soup, turkey, chestnut dressing with giblet gravy, beans and cauliflower, and sweet potato casserole."


"In the autobiography she wrote after her husband's death, Eleanor told of how Churchill "stayed up talking, drinking brandy and smoking cigars until 2 or 3 a.m. By all accounts, the only drinking problem Churchill had was when his exacting demands were not met. On the day of his arrival, the White House butler was told how to keep him happy. The menu is recorded in Cita Stelzer's "Dinner With Churchill": "I must have a tumbler of sherry in my room before breakfast, a couple of glasses of scotch and soda before lunch, and French Champagne and 90-year-old brandy before I go to sleep at night."


"David McCullough tells of Churchill joining Roosevelt on a White House balcony for the ceremonial lighting of the National Christmas Tree. The two men addressed a crowd of 20,000 on the White House lawn and a nationwide radio audience. The prime minister went on to say:
"This is a strange Christmas Eve. Almost the whole world is locked in deadly struggle, and, with the most terrible weapons which science can devise, the nations advance upon each other. "Still, he said, it was entirely appropriate to pause to celebrate Christmas. "Let the children have their night of fun and laughter," he said. "Let the gifts of Father Christmas delight their play. Let us grown-ups share to the full in their unstinted pleasures before we turn again to the stern task and formidable years that lie before us, resolved that, by our sacrifice and daring, these same children shall not be robbed of their inheritance or denied their right to live in a free and decent world."


The next morning, Churchill and Roosevelt, surrounded by security men, attended a Christmas service at a nearby Methodist church.