The RNC and Brief Election 2012 Comments 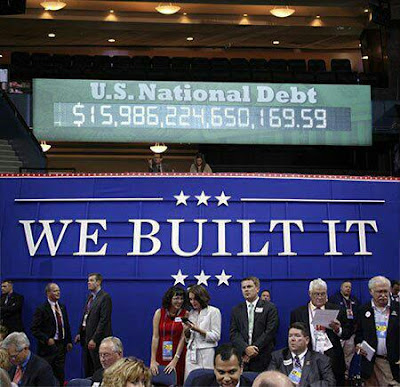 Here's an unintended, humorous, graphic from the RNC last night, but there is plenty of truth in it.  Not much truth from Paul Ryan last night, according to most 'fact check' type websites and most commentators.  "Ryan must have amnesia, said Meet the Press host David Gregory.  “He is a man who voted for the auto bailout, he voted for TARP, he voted for both wars that were not funded, and he voted for Part D of Medicare (not funded), and he’s spent his entire life in government,” Gregory said. As a ranking GOP member of Bowles/Simpson, he voted against the deficit commission findings.

So goes the RNC.  It will be good to have the conventions behind us, which today are just large infomercials, and to get the campaign in full swing.  The debates will be critical as always, as will as voter turnout.  Hopefully voter turnout will not be impacted the concerted GOP efforts to suppress turnout.  If you have to suppress the vote to win, your ideas must be lacking and weak.

This will probably a close election.......and it is certainly an important one.  My strong recommendation is stay with President Obama, who has charted a strong course resulting in steady recovery from the 2008 Great Recession.  We really do not know who Mitt Romney is due to his very fluid positions on critical issues.  REGISTER AND VOTE.