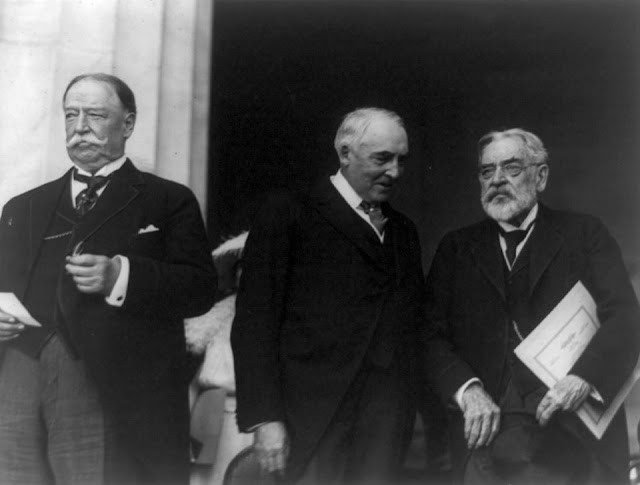 As a lover of Presidential history and a collector of historical memorabilia, I am 'blown away' and 'taken' by this photograph. It was found by my friend Neal Robinson, a great displayer of historical photography.

It is a photograph of Former President and Chief Justice William Howard Taft, President Warren G. Harding, and Robert Todd Lincoln (August 1, 1843 – July 26, 1926), son of Abraham Lincoln, during the dedication of the Lincoln Memorial on Tuesday, May 30, 1922, in Washington DC.

Mr. Lincoln graduated from Phillips Exeter Academy in 1860, then studied at Harvard University from 1861 to 1865 where he received a law degree.  On February 11, 1865 he was commissioned as an assistant adjutant general with the rank of captain and served in the last weeks of the American Civil War as part of General Ulysses S. Grant's immediate staff.

He was 35th United States Secretary of War and he served as the U.S. Ambassador to the United Kingdom from 1889 to 1893. Lincoln made his last public appearance at the dedication ceremony pictured above in Washington, D.C. for his father's memorial on May 30, 1922.
Posted by bbogodfrey17@gmail.com at 2:48 PM