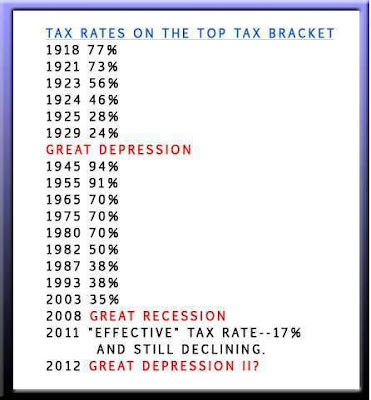 No, I do not think the trend will lead to a Great Depression II as the graphic suggests.  I do think it is interesting to chart the rate on the top bracket historically.  Simply returning to the Clinton era rate of 38% on the top bracket would reduce the current national deficit by approximately one-third.  Makes sense to me.  If low rates on the top bracket was a jobs creator as we are told by conservatives, we would be awash in jobs.  Of course, we are not.

After the November election, my guess is we will get serious about this option, as well as many others, in a concerted effort to get the national deficit under control.
Posted by bbogodfrey17@gmail.com at 7:44 PM