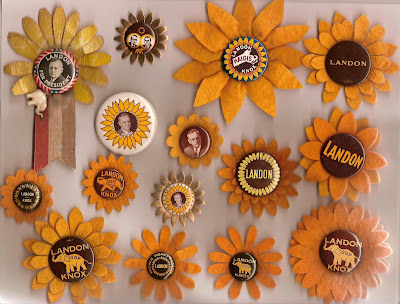 One of my joys and relaxations is collecting old political items. Here, I am displaying some of my Alf Landon for President buttons. I have numerous buttons for each presidential candidate back to the election of 1896. I also have North Carolina local and statewide campaign buttons. Campaign buttons were very important before the days of media ads.
Known as the leader of the liberal Republicans in Kansas, Landon was elected Governor of Kansas in 1932. He sought the GOP nomination for President in 1936 opposing FDR. Landon proved to be an ineffective Presidential candidate who rarely traveled. Landon actually respected and admired FDR and he supported much of FDR's New Deal legislation. The election of 1936 proved to be very lopsided. Landon lost by 10 million votes and didn't even carry his home state of Kansas. Someone jokingly said, "had the campaign had gone on much longer, FDR would have carried Canada."
Landon was a good man. After the defeat of '36, he played a major role in fighting back the isolationist movement in America in 1939. He later backed the Marshall Plan. Later in 1960, he supported LBJ on Medicare and other Great Society programs. His daughter, Nancy Landon Kassebaum, became a U.S. Senator from Kansas and married Tennessee Senator Howard Baker. Landon died one month after his 100th birthday in 1987. I like his campaign buttons. They are unique, as most of them depict the Kansas state flower, the Sunflower.
Posted by bbogodfrey17@gmail.com at 9:39 AM