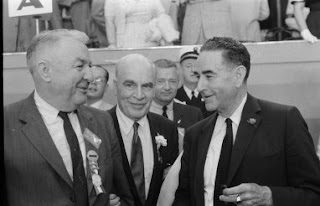 The following is a speech that Senator Sam Ervin gave on the floor of the US Senate in 1967. This was the year that Senator Sam felt compelled to oppose powerful Republican Senator Everett Dirksen's effort to get footing for a constitutional amendment permitting prayer in the public schools. After researching the amendment, Sam, a constitutional attorney and authority in the Senate, came to the conclusion that the Founding Fathers intended the wall between church and state to be absolute. In your mind's eye, see him, hear him now, as Sam took to the Senate floor against Senator Dirkson with the following statement, which some call his greatest Senate speech, and a poignant statement of Sam's religious belief:

"I look at the universe and behold with wonder the life-giving sun, which rises in the east at morn, travels across the sky by day, and sets in the west at eventide; the galaxies of stars, which twinkle in the infinite heavens; the clouds, which bring the soil-refreshing rain; the majestic mountains with the hill at their knees; the rivers, which water pleasant valleys and fertile plains and run endlessly to the sea; the tall trees, which lift leafy arms heavenward to pray; the arbutus and dogwood, which brighten springtime, and the marigolds and roses, which ornament summer; the glory of the leaves and ripened crops of autum; the crystal snowflakes, which descend so gently in the winter; and the other beautiful things past remembering, which adorn the earth."

"I note with awe the order and regularity of the processes of life and nature as the tide ebbs and flows, as the harvest succeeds the seedtime, and as the heavenly bodies move in the orbits without mishap in conformity with natural laws. I observe with reverence that, despite the feet of clay on which he makes his earthly rounds, man is endowed with the capacity to obey conscience, exercise reason, study holy writings, and aspire to righteous conduct in obedience to spiritual laws."

"On the basis of these things, I affirm with complete conviction that the universe and man are not the haphazard products of blind atoms wandering aimlessly about in chaoes, but, on the contrary, are the creations of God, the Maker of the universe and man."

"Religion adds hope to man's desire for immortality. This desire is not to be attributed simply to the egotism of men, or their fear of the unknown beyond the grave, or their repugnance to the thought of their nothingness after death."

"The pessimistic philosopher Schopenhauer was sadly in error in his caustic comment that "to desire immortality is to desire the eternal perpetuation of a great mistake." The longing for immortality is prompted by the most meritorious motives."

"Life on earth is at best all too short and unfinished. Man entertains high hopes of the abundant life with his loved ones, and undertakes worthwhile things for them and his generation. His high hopes vanish as he is robbed of those he loves by death, and his hands drop the working tools of life while his undertakings are incomplete."

"As a consequence of these things, our hearts cry out that there must be some place after life's fitful fever is over where tears never flow and rainbows never fade where high hopes are realized and worthy tasks are accomplished, and where those we "have loved long since and lost awhile" stay with us forever."

Senator Sam J. Ervin, D-NC, Senate Floor, 1967
Some say this speech, singlehandedly, put an end to the move in the Senate in 1967 to begin the process of amending the constitution to put prayer in the public schools. What a splendid statement. In my view, Senator Sam got it right, beautifully right, on all counts.
(Photo above is Senator Sam, Gov. Luther Hodges, and Gov. Kerr Scott).
Posted by bbogodfrey17@gmail.com at 5:30 AM