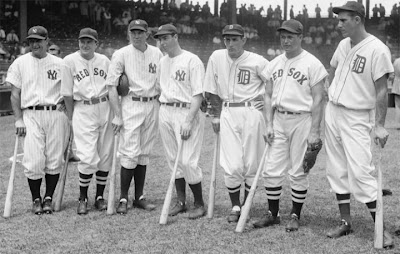 This picture was taken at the 1937 Major League Baseball All-Star Game at Griffith Stadium in Washington, DC. Pictured left to right are Lou Gehrig, Joe Cronin, Bill Dickey, Joe DiMaggio, Charlie Gehringer, Jimmy Foxx, and Hank Greenberg, all of whom would be inducted into the Baseball Hall of Fame.

Dizzy Dean of the St. Louis Cardinal "Gas House Gang" was the losing pitcher. With the retirement of Babe Ruth, Dean had become the biggest draw in baseball. Dean's toe was broken on a line drive during the game and it began the downfall of his career (they brought him back too early and it affected his delivery).

Having beaten Alf Landon the year before so badly that it was said had the campaign gone on another month he would have carried Canada, President Franklin Delano Roosevelt throw out the first pitch. I'll bet it was quite a day.

(Greensboro's Rick Ferrell is a member of Baseball's Hall of Fame).
Posted by bbogodfrey17@gmail.com at 7:27 AM