Health Care Reform and Beyond 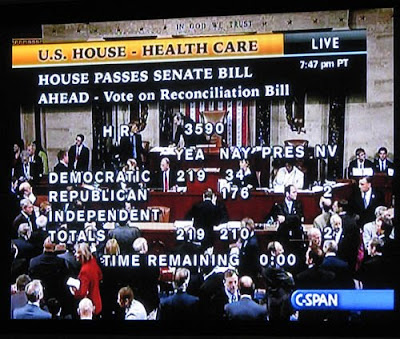 America took a huge step last night. Health Care Reform (HCR) will now become the law of the land. I am not sure how it will impact my business. Most of the significant changes will not take effect for 3 or 4 years. I do know, based on my daily observation as an employee benefit specialist, and based on my values, that it is right for America.
When Social Security was enacted in the '30s, I suspect that some of our grandparents had responses similar to the doomsday responses I am observing in some people today (although my facebook feed is full of celebration and affirmation also). The bill is definitely one of the most significant pieces of social legislation of the past 100 years, along with Civil Rights, Medicare, and Social Security.
Regarding what the future holds, David Frum, the conservative Bush speechwriter, said this morning to forget repeal of HCR. "Who will vote to re-open the "doughnut hole" in senior prescription drugs? Who will vote to allow insurers to deny pre-existing conditions? Who will vote to kick 25 year-olds off parent's coverage?", he says.
By the Fall of 2010 Frum speculates the economy will be improved. Some provisions in HCR such as pre-existing coverage for children, kids up to age 26 on parent's coverage, and no policy limits, will have kicked-in and be seen as favorable. In Frum's analysis, Democrats will likely be helped by all this in the Fall. He further observes that HCR will be a boom to cable news and talk radio as those audience will stay "stirred up". That's unfortunate.
What many have failed to observe is that this is actually a moderate bill. It is similar to Republican Sen. Chaffe's bill in the early '90's where the "exchanges" were first introduced. This bill is NOT a single-payer system, is NOT extended Medicare, nor does it contain a Public Option.
Hopefully we can move on to job creation, immigration reform, and climate/energy intitiatives. The real question will be how we (not the government) move America to the next "wave", or next level, of increased productivity in an effort to move the economy forward in a meaningful way. Previous "waves" have resulted from the introduction of the microchip, the personal computer, the internet, World War II, and the Industial Revolution. The next "wave" will likely be related to energy / climate / biotechnology / robotics, or fields which do not even exist presently. Put on those thinking caps.
Posted by bbogodfrey17@gmail.com at 10:53 AM