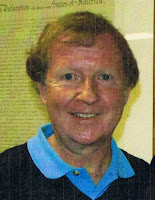 As I have noted on my facebook page, I had a friend from my youth who died last week, Don McLean. His funeral was today.

I am pleased to have run into Don quite a few times over the years. I am especially happy to have renewed my friendship with him on facebook. We have exchanged quite a bit of information and opinion over the past months by way of facebook. Unfortunately, we intended to get together this Spring, but that will not happen.

While he had varied interests such as sports, beach music, golf, and politics, Don's life was centered on his faith and his religion. I consider myself a person of strong faith, so he and I often exchanged thoughts and views on our faith. We did not always agree on emphasis or focus regarding our faith, but I was pleased that we had this important facet of our lives in common. I was impressed by the committed nature of his faith and his views and, although we occasionally became frustrated with each other, I am certain we respected each other's perspective in the end.

Attached is a wonderful column that Scott Yost, columnist for The Rhino Times, wrote about meeting Don on a couple of occasions. As with Don, I do not necessarily agree with all of Yost's "take" on religion in the column. But for me, it is not a matter of agreeing or disagreeing. This is just a wonderful, thought provoking, perspective on faith, and on Scott's "accidental" meeting of my unique friend, Don McLean.

I hope you will read it. Don McLean was an interesting, well-informed person of strong faith...... and he was a good guy. R.I.P Don.