What is the Rage Really About? 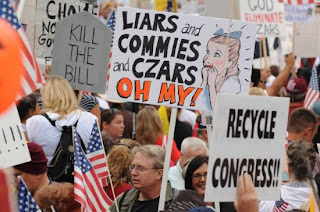 The rage over the Health Care Reform bill is curious. The legislation was certainly a big deal, as VP Biden alluded to. But the bill does not erect a huge New Deal-Great Society-style government program. There is no one-payer system, no Medicare-for-all, not even a public option. One editorial last week observed that the bills prototype is health care legislation Mitt Romney signed into law in Massachusetts. It contains what use to be GOP ideas.
So why all the rancor? Why the level of incivility? Why the racial slurs, gay-slurs, viciousness toward Pelosi? Why Obama depicted as Hitler? The bullying, the threats, and the acts of violence following the passage of the bill have been amazing to watch.
One editorial observer sees it as an extension of the new familiar theme of "take our country back". The problem is that the country romanticized by the far right hasn't existed for some time. A Quinnipiac University poll released last week indicated that Tea Party member demographics are polar opposite of the direction in which the country is moving. America is becoming more diverse, less dogmatic, and college enrollment is through the roof. The Tea Party, a less educated, disproportionately white, largely evangelical, Christian group, is not the future, according to most demographic studies.
What we have, it seems, is a reality that is difficult for the "give me my country back" group to grasp. We had a woman (Nancy Pelosi) who pushed the bill through the House. The most visible proponents included a openly gay man (Barney Frank) and two Jews (Chuck Shumer and Anthony Wiener). The black man in the White House signed the bill into law. Using demographic comparison's as a guide, this group is a far-right Tea Partier's worse nightmare.
Hence, the frustration and the anger. There are certainly some legitimate concerns about the bill around taxation, role of government, etc. But the message is lost in the madness and in the Tea Partier's confusion regarding what is going on in America.
The GOP is going to have to distance themselves from the far-right. But it will be difficult. They want to use it politically for gain. They must because it is an important part of their base. Long term, this is a dead-end road for the GOP. America has changed. America is moving forward. One of the two major parties, if they want to be a viable part of the dialogue about the future, must figure out how to shed themselves of baggage which America is leaving behind.
Posted by bbogodfrey17@gmail.com at 11:26 AM