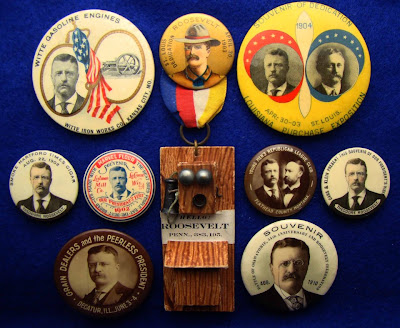 Teddy Roosevelt was the 26th President of the United States.  He is noted for his exuberant personality, range of interests and achievements, and his leadership of the Progressive Movement, as well as his "cowboy" persona and robust masculinity.  He was a leader of the Republican Party and founder of the first incarnation of the short-lived Progressive ("Bull Moose") Party in 1912.

In 1901, President William McKinley was assassinated and Roosevelt became President at the age of 42; he remains the youngest president. He was elected President in his own right in 1904. Roosevelt attempted to move the Republican Party (GOP) toward Progressivism, including trust busting and increased regulation of businesses.

The above pictured TR political buttons belong to a friend and are a wonderful grouping.  I like TR buttons very much and own one a number of them, but few of the beauty and quality as those pictured above.  Enjoy.  TR was a worthy early century leader and character.