The Election of 2012 and Proper Focus 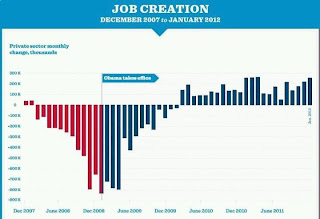 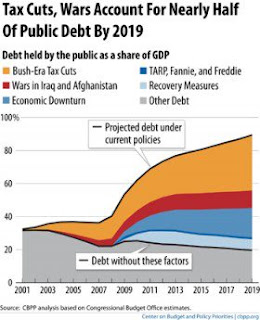 As the 2012 Presidential election approaches, it will be important for the electorate to keep the proper focus.  We can be easily distracted by "slick" ads on both sides.  In addition, the communications "war" on cable, in print, and on blogs and other websites can be overwhelming.

Above are two charts.  The first one simply charts the decline of jobs prior to January 2008 and the subsequent steady growth of job creation since that time.  We have had 28 straight months of job growth.  We lost 750,000 jobs in the last one month of Bush.

The bottom chart graphs the components of the deficit.  As you see, the Bush tax cuts and the wars in Iraq and Afghanistan account for well over a third of the debt. The Bush tax cuts could easily be reversed with a return to Clinton level tax brackets for upper income. The source of the information is Congressional Budget Office and the Center for Budget and Policy Priorities.

Be informed.  Vote wisely.  I say "stay the course".  The economic hole we are in is deep, and the direction and the vision for America is correct.
Posted by bbogodfrey17@gmail.com at 8:49 AM