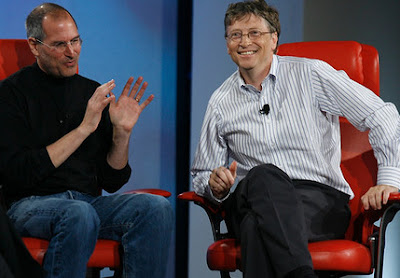 "In astronomy, a binary system occurs when the orbits of two stars are linked because of their gravitation interaction. There have been analogous situations in history, when an era is shaped by the relationship and rivalry of two orbiting superstars: Albert Einstein and Niels Bohr in twentieth-century physics, for example, or Thomas Jefferson and Alexander Hamilton in early American governance. For the first thirty years of the personal computer age, beginning in the last 1970s, the defining binary star system was composed of two high-energy college dropouts both born in 1955, Bill Gates and Steve Jobs." ~Walter Isaacson, "Steve Jobs - A Biography."