Giancarlo Stanton - A Reason to Read The Box Scores in 2018 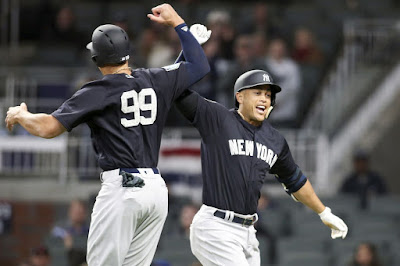 Giancarlo Stanton has amazing, mammoth power. He is an amazing athlete. And to top it off, in 2018 he is a New York Yankee hitting in the line-up just behind 6 feet 9 in, 285 lb. Aaron Judge.
For a baseball fan, the most exciting play in all of sports is a home run.  The most prized records in all of sports are home run records.  Stanton will make this baseball season most exciting.  He hit 59 home runs in 2017.  He has begun the 2018 season with two tape measure shots in his opening game as a New York Yankee.
Stanton's HR in the first inning of Opening Day measured 426 feet. The exit velocity was measured at 117.3 mph, the fastest for a batted ball at Rogers Centre in Toronto since Statcast began tracking in 2015. The previous fastest exit velocity at the park was held by Judge (113.6 mph).
According to MLB.com, Stanton's first-inning homer also had the hardest exit velocity for any home run hit to the opposite field since Statcast has tracked such things. His homer in the ninth to straightaway center off Tyler Clippard wasn't quite as hard (109.4 mph) as the first, but it did travel farther (434 feet).
Stanton hit 39 home runs in a short minor league season in Greensboro in 2008.  He will definitely provide reason to read the box scores in 2018.  Take a look at his opening day shot here.  Enjoy the summer.  At this point, he is the most Ruth-esque player of our lifetime.