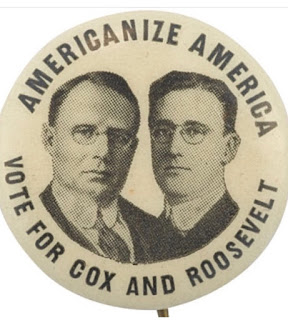 James M. Cox was born on this day in 1870.  He was Democratic nominee for President in 1920.  You will recognize his running mate.  He is modern day Cox Communications.  They were soundly defeated by a GOP ticket of Harding and Coolidge.

This pin is 'the flagship', 'the holy grail' of buttons of the American political memorabilia collecting hobby (along with a few other Cox / Roosevelt jugate buttons). (I do not own it).