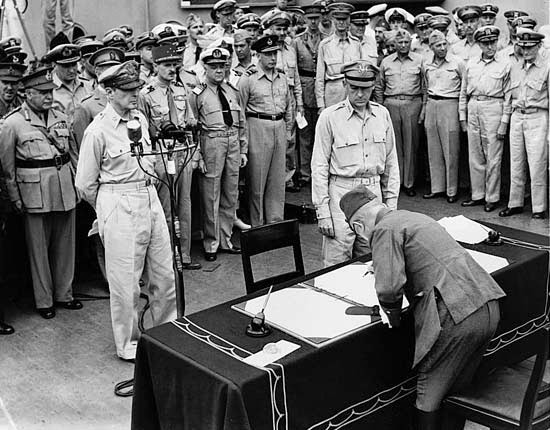 What a complex, contradictory, egotistical, stubborn, paradoxical, courageous, brave, great 20th century military strategist and leader Douglas MacArthur was.  I finished a great book, “The Most Dangerous Man in America - The Making of Douglas MacArthur.”  I learned much about WWII and leadership.  I learned much about his complicated relationship with President Roosevelt, who considered he and Huey Long the two most dangerous men in America, and how competitive relationships among military leaders can sometimes achieve great, high-level results.
I have a friend who values great, historic speeches and addresses.  He carries them in his briefcase.  The MacArthur speech I will end this blog with should be one of them.  It is short, but the setting is dramatic and the words are wise, honorable and visionary.

General Douglas MacArthur arrived, with his entourage, in Yokohama, Japan after word of the Japanese surrender.  There was no assurance his arrival would not be met with gunfire.  No surrender documents had been signed.  He and his staff piled in a Japanese-organized motorcade for the twenty-mile trip into downtown Yokohama.  MacArthur’s staff insisted he be accompanied by armed guards and vehicles.  MacArthur waived it off.  He wanted the Japanese to know that he was coming as their friend. Winston Churchill would later call this decision one of the bravest acts of World War II.

It took MacArthur two hours to travel through the rubble of Yokohama.  On both sides of the road, Japanese soldiers and citizens turned their backs to him……a sign of respect accorded only to the emperor.  As MacArthur assumed his position in his suite at The New Grand Hotel in Yokohama, five hundred troops of the 11th Airborne fanned out around the hotel for protection.

On the morning of Sunday, September 2, MacArthur drove from The New Grand Hotel to Yokohama Naval Base, where he was put aboard a launch for the USS Missouri which lay anchored in Tokyo Bay.  He had spent the previous day mapping out the surrender ceremonies, including a diagram designating where each of his fellow commanders would stand.  A short time after his arrival, a delegation of eleven Japanese officials, all dressed in formal attire, with top hats, arrived, led by the Foreign Minister Shigemitusu.

There was no cheering; the sailors of the Missouri, including 1st Shipmate Ervin A. Godfrey, a very proud uncle of mine from North Carolina, watched in silent awe.  As MacArthur stepped to the microphone, he began: “We are gathered here, representatives of the major warring powers, to conclude a solemn agreement whereby peace may be restored.  The issues, involving divergent ideals and ideologies, have been determined on the battlefields of the world and hence are not for our discussion or debate.”

The Japanese watched him closely, with one of them later noting that his hands trembled, if only slightly.  MacArthur, his voice steady, went on: “It is my earnest hope and indeed the hope of all mankind, that from this solemn occasion a better world shall emerge out of the blood and carnage of the past…..a world founded upon faith and understanding…….a world dedicated to the dignity of man and the fulfilment of his most cherished wish…….for freedom, tolerance and justice.”
MacArthur had written the words himself, without help from his staff, and without reviewing them with anyone.  He wanted to set a calm tone with simple sentences shorn of triumph.  It was, without question, biographer Mark Perry believes, Douglas MacArthur's finest speech and his finest moment.  After the signing of the surrender documents, MacArthur returned to the microphone: “Let us pray that peace be now restored to the world and that God will preserve it always.  These proceedings are now closed.”  And with those words, World War Two ended.

(Source: Mark Perry’s, “The Most Dangerous Man In America - The Making of Douglas MacArthur.”)