Some Final Thoughts on 2012 GOP Convention 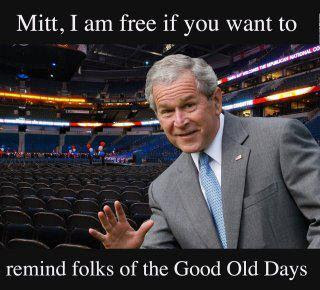 Well, the GOP Convention is behind us.  It will be interesting to see if any poll "bounce" results for the ticket.  The Clint Eastwood empty chair fiasco is dominating press coverage.  Mitt did not mention the Afghanistan war, foreign policy, nor our troops.  According to all accounts, this was the first time since 1952 that a GOP nominee has not mentioned war or our troops in an acceptance speech.

At this point in the campaign, I like how my friend, Professor Laura Roselle, Distinguished Professor at Elon University and Visiting Professor at Duke puts the race (Laura was a student assistant to Condi Rice at Stanford where she got her PhD and was an early director of the Carter Center in Atlanta):  "This is what I see: under Bush 13 months of job losses - under Obama 27 months of job growth -- .... under Bush DOW 7000, now 13000

.... under Bush my retirement earnings had crashed, now recovered ..... under Bush auto industry crashing, under Obama back on their feet ... and let's not get into Osama bin Laden .... Sure we all want things to recover faster - Maybe if members of Congress - especially the Republicans -- had tried to work together rather than seeking only short term points, we would be further along what promises to be a long recovery. I don't think Americans are stupid - I think we all want things to be better sooner rather than later and we forget what an absolute disaster Obama inherited."

I do not see this as "blaming Bush."  I see this as intelligently reminding ourselves where we have been, and where we are.  The choice for me is simple: 'Do we continue to move forward with this administration, or do we go back to policies from which we are attempting to recover?'  Pretty easy choice for me.  We'll see how the Democratic Convention goes.  I look forward to being in Charlotte on Monday for the release of a Elon University Poll and a panel discussion at the Charlotte Observer building lead by friend John Robinson.
Posted by bbogodfrey17@gmail.com at 5:56 AM