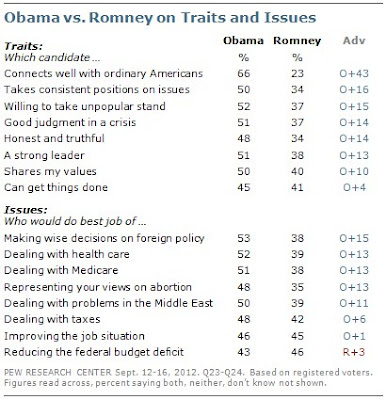 Polling can lend great insight into how candidates who are running for office are viewed by the American people.  This Pew Research Center survey indicates the gap which exists between Mitt Romney and President Obama in many areas critical to the electorate.  This survey, along with the outrageous 47% video, reinforces my view that Mitt Romney may be the worst Presidential candidate in quite some time.

A CNN blog today by Gloria Borger bottom lines Romney from my perspective.  "Romney has a businessman's approach to politics. Which means: He sizes up a situation (or an audience). He figures out what he needs to do to cut the deal. Then he does it, and expects it to work. Ergo, Romney speaks to a group of conservative GOP fat cats, and tells them what he thinks they want to hear so they will cough up the dough. Belief is almost beside the point. He was closing the deal."

BINGO, Gloria Borger. I know many think America can be run like a business. A business is run to maximize shareholder value. America is run by a leader who's able to carve together a coalition from a mosaic of different people, cultures, and interests with a wide range of needs and objectives. Very different skill set from businessman. (That's why Perot, Trump, Iacocca-types don't work).

This should continue to be an interesting election cycle.  The best out thing to come out of this election cycle is the fact that we seem to be starting to have a national conversation about what and who we are as Americans as it relates to our responsibility to each other and the nation.