Remembering the "Greensboro Four", On This Saturday, February 4, 2012 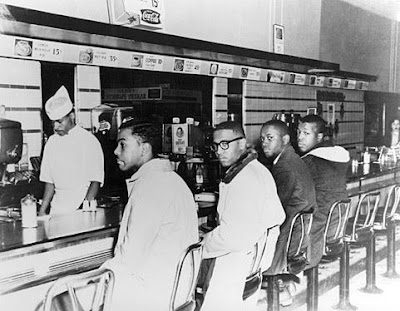 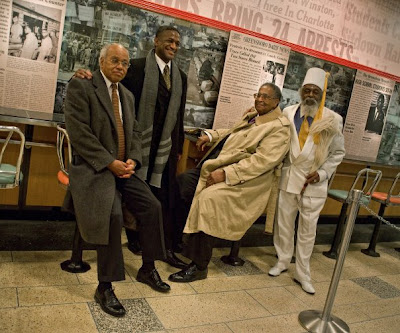 Let us recall with honor and respect the "Greensboro Four", Joseph McNeil, Franklin McCain, Ezell Blair, Jr. (known today as Jibreel Khazan), and David Richmond (all shown above). On this day, 52 years ago, they were seated at the Woolworth's lunch counter (they are shown above at the actual counter) in my hometown of Greensboro, NC, likely very afraid, but surely very courageous. It was a very tumultous time in downtown Greenboro during the early stages of the sit-in, but the moment was right for change to begin in America. I lived 5 blocks from downtown.


I was honored to speak with and shake hands with "The Four" on the 60th anniversary of the sit-ins and during the opening of the International Civil Rights Museum on February 1, 2010. It was a moving time for me. They are pictured today in the bottom photo, with David Richmond, Jr. standing in for his deceased father, second from left. The museum is so appropriately housed in the Woolworth's Building in downtown Greensboro. (You can find related blogs in January / February 2010 of ThePoint).
Posted by bbogodfrey17@gmail.com at 9:07 AM