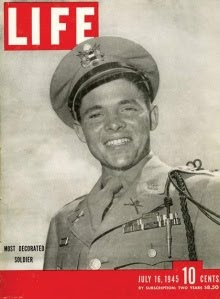 Today, during a very impressive Medal of Honor ceremony in the East Room of the White House, the President made reference to Audie Murphy.
Murphy was the most decorated American soldier during World War II. He received 33 U. S. medals, five French medals, and one Belgium medal. He won every U. S. medal available, five of them more than once. He won the coveted Medal of Honor, the highest service medal.
Murphy went on to become a celebrated movie star for over two decades in the post-World War II era. He appeared in 44 films, including To Hell and Back in 1955. He had a career as a country western music singer and composer for a time as well.
He died in a plane crash, as so many stars seemed to do in the mid-20th century, in 1971 at the age of 47. Audie Murphy, a genuine American hero.....one we seem to hear less and less about as time passes.
Posted by bbogodfrey17@gmail.com at 12:51 PM