"The Birth of a New American Political System", by Bill Moyers 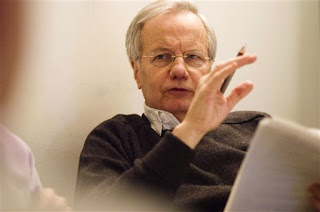 In this great piece, the great American liberal thinker, Bill Moyers, presents the case for a new American political system he sees developing. He says, "based on developments in our post-9/11 world, we could be watching the birth of a new American political system and way of governing for which, as yet, we have no name. And here’s what I find strange: the evidence of this is all around us and yet it’s as if we can’t bear to take it in or make sense of it or even say that it might be so."


"Let me make my case", Moyers says, "however minimally, based on five areas in which at least the faint outlines of that new system seem to be emerging: 1) political campaigns and elections; 2) the privatization of Washington through the marriage of the corporation and the state; 3) the de-legitimization of our traditional system of governance; 4) the empowerment of the national security state as an untouchable fourth branch of government; and, 5) the demobilization of “we the people.”


He concludes, "much of it may be happening in a purely seat-of-the-pants fashion. In response, there has been no urge to officially declare that something new is afoot, let alone convene a new constitutional convention. Still, don’t for a second think that the American political system isn’t being rewritten on the run by interested parties in Congress, our present crop of billionaires, corporate interests, lobbyists, the Pentagon and the officials of the national security state."


Finally he says, "out of the chaos of this prolonged moment and inside the shell of the old system, a new culture, a new kind of politics, a new kind of governance is being born right before our eyes. Call it what you want. But call it something. Stop pretending it’s not happening."


Read for yourself.  It is an excellent, important piece.
Posted by bbogodfrey17@gmail.com at 6:31 PM