A View of President Obama To Date 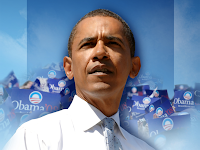 As Christmas approaches, I sit in amazement as I follow the closing lame duck session of the 111th Congress. Now that the mid-term elections are behind us, along with the political posturing which accompanies it, so much is being accomplished. The President and his team are proving to be extremely effective at building consensus, moving legislation, and assuring that Obama's ambitious legislative agenda is passed.

The accomplishments of this administration to date are impressive. Health Care Reform, the $789. billion Recovery Act, major financial sector reform, the automotive industry rescue (which is nearly all paid back), appointment of the first Latino to the Supreme Court, expansion of SCHIP for children (health insurance covering 4 million more low income kids), expansion of Pell grants for students, the pulling out of combat troops from Iraq, on and on. What a list. This was before the lame duck session, which includes passage of the massive tax cut bill, DADT repealed, the START Treaty passed, passage of a continuing resolution to keep government running, and a 1st Responder Health Care bill enacted. Astounding.

The retail sector is indicating that this will be a robust Christmas season. All economic indicators, except jobs, point to an improving economy. The transitional world economy, and changing attitudes regarding how we consume, will continue to make this a difficult recovery in terms of employment. Much of the legislation referenced above will have a positive impact on jobs over time. The next big challenge will be attacking the deficit, which has rightly taken a back sit to stimulating a sluggish economy over the past months.

President Obama seems to be hitting his stride. His approval rating has increased significantly..... before the lame duck accomplishments mentioned about. Some progressives continue to be frustrated with him. Continued successes, such of repeal of DADT, should help on that front. Yes, there have been some disappointments such as immigration reform and energy/climate legislation. Their times will come.
An important trait of every successful statesman is said to be the ability to adjust to changing circumstances without selling their soul. President Obama seems to be measuring up. As a friend mentioned, his steady course reminds me of the old idiom, "the cream eventually comes to the top." Keep churning, Mr. President. As a moderate progressive, I could not be happier with your Presidency after two years.
Posted by bbogodfrey17@gmail.com at 10:28 AM