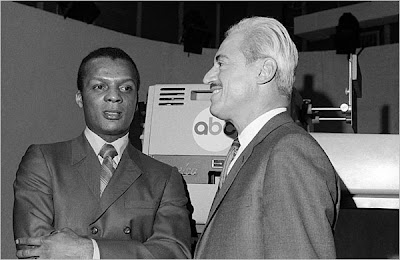 A great deal was made last week of the NBA's Lebron James and his move to the Miami Heat. Leaving aside the questionable way it was handled, the move itself was made possible by the actions of Curt Flood and Marvin Miller, pictured above, without question the two most important and significant people in the history of sports economics.

Flood became a very important figure in sports history when he refused to accept a trade in 1969. Flood believed that Major League baseball's decades old "reserve clause", which kept players beholden for life to the team that originally signed them, was unfair and archaic. Flood demanded, in a letter, that commissioner Bowie Kuhn declare him a "free agent". Kuhn denied his request, citing the "reserve clause" and it's inclusion in Floods 1969 contract.

Flood took his case all the way to the U.S. Supreme Court. Among those testifying on Flood's behalf were former players Jackie Robinson and Hank Greenberg, and owner Bill Veeck. Flood had unanimous support from player representatives. Flood likened himself to "a well-paid slave." The Supreme Court acting on "stare decisis", meaning "to stand by things decided", ruled 5-3 in favor of Major League Baseball, upholding an archaic 1922 case. But, "the baseballs were out of the bag."

A few years later in 1974, Marvin Miller, a labor economist and executive director of the players union, encouraged Andy Messersmith and Dave McNally to file a grievance arbitration. The ensuing court decision declared that both players had fulfilled their contractual obligations and had no further legal ties to their ball clubs. This effectively eradicated the reserve clause and ushered in free agency.

The concept of free agency, the ability of a player to offer his services on the free market, is the basis on which Lebron James was able to move from Cleveland to Miami with his NBA career. Jesse Jackson said Cleveland Cavs owner Dan Gilbert sounded as though he was dealing with a "runaway slave." Jackson said Gilbert seemed to have a "slave master's mentality." Jesse has a way of framing things, but he does make an interesting historical analogy.

Miller was an economist. He knew that too many free agents could actually drive down players salaries. Miller agreed to limit free agency to players with more than six years of service, knowing that restricting the supply of labor would drive up salaries as owners bid for an annual, finite pool of free agents.

Salaries in sports are very high. It is the salaries of the less skilled players that is of most concern. The highly skilled players pay for themselves through ticket sells, TV revenues, and the increased value of an owner's franchise. The free marketplace hopefully works to sort out the challenge of the market price for players versus the entertainment value they add. One thing is for certain, Marvin Miller and Curt Flood certainly were literal "game changers."
Posted by bbogodfrey17@gmail.com at 7:01 PM